Our first full day in Miyajima after settling in the previous day we decided having first checked the weather forecast that our best chance of getting a fantastic view at the top of Mount Misen would be today. It was not guaranteed but we set off in good hope. Daz checked the Geocache App to see if there were any caches that we could take in as we travelled to the Roadway Cable car.

So, the competition started with five geocaches just waiting to be discovered. The first one of the day was found by Hels, the next one by Daz but we had to give upon the third after an extensive search. The fourth was found by Daz so it was up to Kate and Brett to find the last one of the day.
The fifth one was a bit of a challenge and ready us to get into the woods. Brett nearly stepped on a snake! He only saw the back of it as it decided the Brett was a bit too big to eat…

It would eventually turn out that Brett finished the challenge scoreless! When Kate finally discovered the fifth and final cache. The plan was now to retrace our tracks to the Ropeway Cable Car avoiding a long walk to the top. Brett decided that he had not earnt an easy trip so would instead as punishment walk to the top (the map stated it was 1.5hr walk and about 2.3km long – so it was sure to be steep at some points). 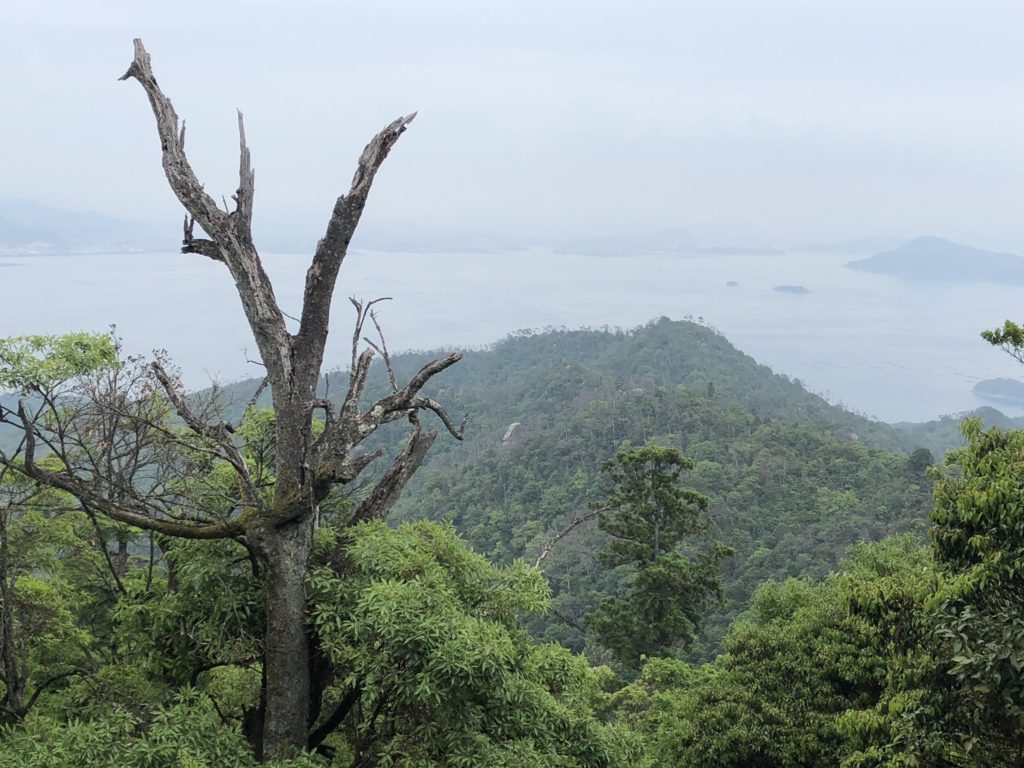 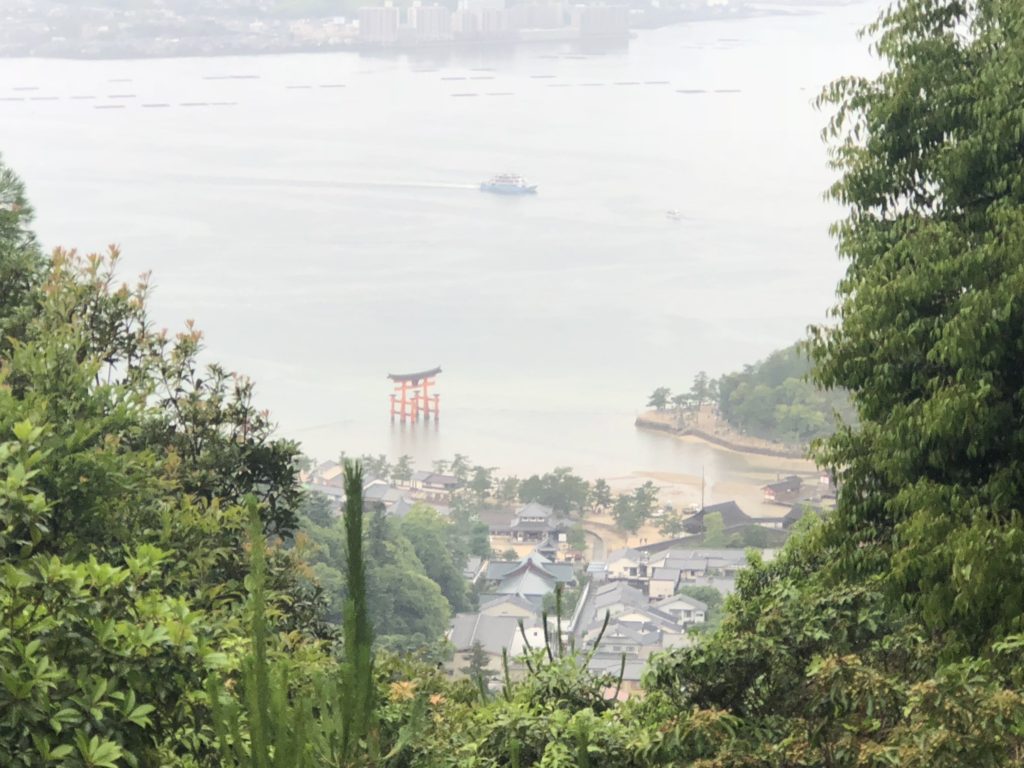 Brett eventually met us Shishilwa Station Café after about 1 hr so was obviously pushing hard. Unfortunately, the weather had shrouded the mountain like a nice comfortable blanket. We decided that there would be very little to be gained to go to the Observatory on top of Mt Misen which was another 1km along the track and 100m above us so we took the not so difficult decision to take the cable car back down. Brett, not feeling he was suitably punished for not finding any caches, said he would go on to see more clouds. It was only when Brett descended the mountain along the Daishoin Course that he noticed (more often than he liked) signs warning walkers on the presence of very dangerous Japanese Vipers (Mamushi). 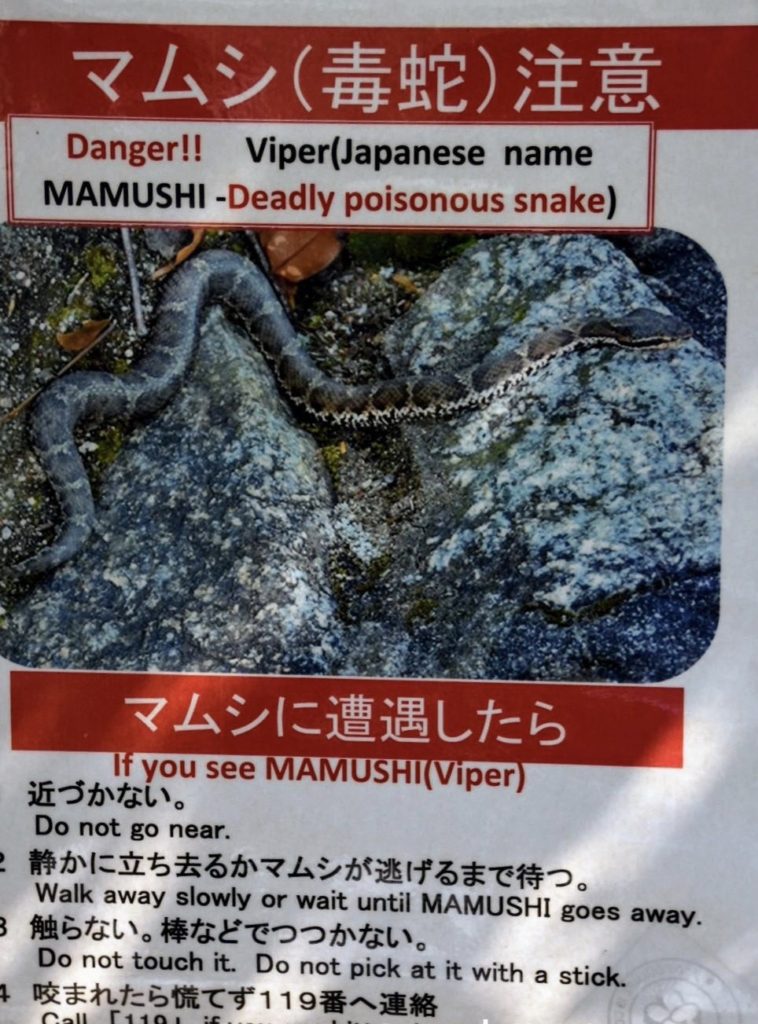 The next time we saw him was back in Starbucks down at sea-level about 3.5 hours later where he confirmed that he did in fact only see more clouds! Feeling our decision not to go to the top validated we tucked into another round of coffees and started a mammoth game of Nominations! The rain was relentless so it after a nice evening meal we returned to our Ryokan (traditional Japanese Inn) to settle in for the night.

Waking up on our last day in Miyajima we were again greeted with a viewscape bathed in rain. Unperturbed we decided we would still sea-kayak through the UNESCO World Heritage Site “Itsukushima Shrine Toril “(or better known as the O-Toril gate) although it would have been easy to not too. The kayak trip would last about 75 mins and gave us an unrivalled personal view of the seafront of Miyajimacho and allowed us to get up and close to the O-Toril Gate. The dramatic gate, of Itsukushima Shrine is one of Japan’s most popular tourist attractions, and the most recognizable and celebrated feature of the Itsukushima shrine, and the view of the gate in front of the island’s Mount Misen is classified as one of the “the Three Views of Japan” – along with the sand bar Amanohashidate and Matsushima Bay) – although we did not see Mt Misen due to a thick cloud blanket still shrouding it. Although a gate has been in place since 1168, the current gate dates back only to 1875 and is built of decay-resistant camphor wood is about 16 metres high.

We used the remainder of the afternoon to travel back to Hiroshima in time for a Baseball match that evening between the Hiroshima Carps and Nippon-Ham Fighters from Hokkaido (Japan’s second largest island and most northern). The Japanese league is made up of two divisions each consisting of 6 teams. The play around 147 games per regular season so you definitely need to love baseball – which of course the Japanese do fortunately. Our tickets put us in the away end which is be fair suited us just fine as they were very vocal. Daz and Brett pretended to know the rules and the scoring and to be fair they were about 40% right! The Fighters got off to a quick start going 2-nil up after the first innings. For the next two hours were indeterminable Strikes Out so by the end of the 8th Innings the Fighters were 3-1 up. A fantastic rally at the end by the home team meant the Carps ended up winning 4-3. Hels and Kate were convinced that it was all a fix!!
I don’t think we were converted to the benefits of watching baseball again but it was a great night and we did learn a new song…

It definitely sounds better in Japanese. We found out that the Fighter beat the Carps 8-4 the next day with the Fighters scoring 7 runs in just one innings – we agreed that we might have gone on the wrong day!