Thurday – Temp minus 9. Ahhh, should have been a day off today but we got notified we were being picked up at 9am to go to the farm, so we woke at 8 for some scrambled eggs and toast, but then another text came saying we were now being picked up at 10am! Apparently the clients wanted a lie in… wish we had that choice! The reason we were needed today is that there are 18 clients coming for dog sledding so we need to prep 4 dog teams. The clients are Italians and generally considered a bit of a nightmare eg not using the sled brakes and generally ignoring all instructions. We get the 4 teams prepped and Hels has Lavuu duty, then word comes of more clients than expected so we need to rush to get a 5th team ready. Daz has to rush backup to the equipment shed for more harnesses and reindeer skins and then help get the 5 dogs down to the lake, all a bit of a panic. Anyhow the first set of clients get away with only one of the Italians falling off. Then it’s turn around time and get set for the next group. But they all had a good run and on return we sort out the sleds and dogs whilst they go on the tour of the farm and get warm in the Lavuu. We have a spot of lunch in the cabin and then get a lift with “horse” Satu (she is a Finn and is a paid worker who helps Heli with the horses – known as horse Satu so not mistaken with boss Satu!). We arrive back at the apartment, have a nap and then cook some food and go back to bed… nice day off!

Friday – Temp minus 8. We are expecting after our day off to spend 2 nights at the farm, so we pack our overnight kit (toothbrushes, kindles and pack of cards!) and get a lift with “horse” Satu. We arrive about 930am to a busy scene in the pre dawn gloom as the others are already setting up the dogs for 8 clients who have booked a long run, this lasts 1 and 1/2 hours rather than 30 minute short run. We are expecting a further 7 guests straight after for a short run, all of them Italians again. We get the 4 teams prepped. And then wait a while as the clients have somehow got lost and Erkki doesn’t find them and get them to farm until much later than planned. (What did I say about Italians!) Anyhow they finally arrive and we set them off, as it is a long run we can get on with some of the chores whilst they are out, and we both pick up dog poop, horse poop and prep a caged area that we are going to use as the puppy kindergarten. Once the italians return we set off the next group. The long group go to Lavuu and have sausages and hot juice to warm them. We then clear up after the second group and go for a quick spot of lunch (left over sausages yum!). We then find out that boss Satu has done a new rota and we are not staying the night but going back to the apartment and getting a day off tomorrow (Saturday)! After that we are going to be split up for a couple of nights as Gaby is leaving shortly to go back to Switzerland and the rota needs a rejig. This means Hels will spend 2 nights at the farm whilst Daz only has to do 2 days of day farming (meaning he gets to return to the apartments for 3 nights) after that we should be back working together again.

After lunch I take Hels out onto the lake to show her how to draw water, then Erkki arrives with a chainsaw and chops up some logs for the wood store… looks like we will need to chop them further with the axe later as they are too wide for the stove in the cabin and some will need chopping further for kindling. Erkki then gives us a lift home and we cook a nice chili before retiring to bed, looking forward to our first day off.

Saturday – Temp -28! Wow a lovely cold day and as soon as it is light and after a good breakfast we set off with all our warm kit on for a hike up the river trail as we have been told there is a hill,Otsamo, about 9km away that is a great view point. The first bit is through the village to the river then along a trail that has been marked by a skidoo. After about 3km of following this undulating trail along the river and through the forest we cross the river on a suspension footbridge. Where the river is narrow it hasn’t frozen over and as it cuts through the ice steam rises off the water in the frigid air. 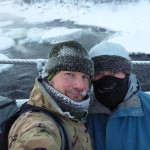 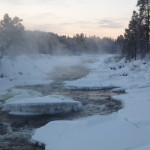 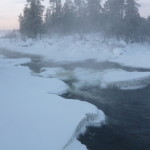 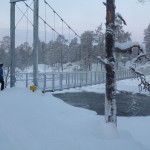 Once on the other side the trail is not so well maintained and the recent snows mean we are walking through about 5 inches of soft snow, occasionally our feet break through the crust and we sink deeper making it hard going. As the day wears on we start thinking that we might not get to the hill and back in daylight and with such low temperatures it’s stupid to attempt it. So after consulting the map we decide to take a trail a little further ahead back to the river then back to Inari. Well, once we leave the Otsamo trail the snow gets so much deeper and we were soon up to our knees and sometimes mid thigh ploughing through the snow, fortunately there are blue marker posts at regular intervals so we hope not to get lost. 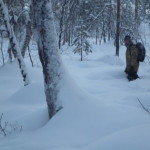 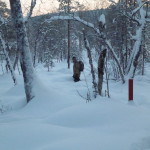 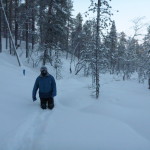 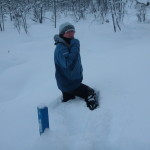 Shortly, having consulted our map and GPS we know we are coming to the river crossing… ahhh, it’s not a bridge but a 500 meter wide expanse of frozen ice with about a foot of snow on top. We remember reading in a guide book that the river crossings should be open mid Feb for ski traffic… but we decide to press on. Daz has a moment of panic as he hears a hollow boom, but Hels eggs him on (she follows behind the heavyweight at a safe distance!) and with his heart in his mouth he leads the way across the frozen expanse safely to the other side! 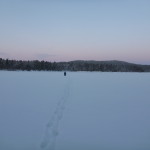 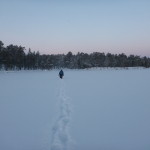 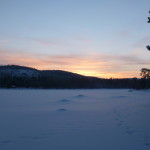 It’s now getting colder and we are both feeling the exertion of the day so decide to walk the last 3 km back to Inari along the road that is a few hundred metres away through the forest. We eventually make it back to the village looking like Shackleton and his gang, ice hanging off facial hair and eyelashes! Back in the apartment we see it has dropped to minus 31and Daz’s nose has just turned white, fortunately no frostnip has set in! 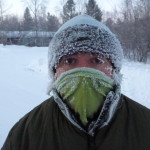 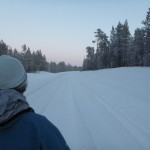 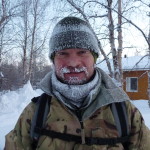 Love reading your blog! So interesting and entertaining, you should publish a book of your travels!

Guys, this is great reading. Envy can be a bad thing, but I have the beauty of reading about your ventures in the warmth of my home. All the best, Monty

Dear Heul &Darren,
Enjoying reading about all you do. The photos were good. The work sounds tedious but being with the dogs makes up for that. Look after yourselves. Much love Mum. Gwyn just arrived after his trip to Glasgow!

Looks great , would love to hike in that kind of weather 🙂 Sounds like hard work whilst at the farm thou…not so keen on that obvs !xx

Ice steam looks amazing – like ghosts of winter spirits flying over the river (or ghosts of people walking on too thin ice!). I have to put on my new fancy pants from Ivalo and go there myself!

How cold? OMG. Digging up pooh, chopping wood, taking the dogs out – sounds like a normal Andover day for the two of you! Love the pictures and look forward to following you on your travels… J&T x