A day off today, and the temperature is a very mild -3 degrees with some snow and a little wind.  We wake late, a luxury and decide what to do with our off day… But first there is no food! The larder is empty so Daz has to go cap in hand to Ola at the Villa Lanca to see what he can scrounge.  Fortunately Ola has the petty cash and gives him some cash so he can buy bread, butter, cheese, yogurt, muesli and bacon…breakfast sorted.

Unlike our previous off days when we went off for ages into the wilds and came home much later exhausted and cold, this time we decide on a short walk around the Juuanta river circuit and as Horse Satu has left ‘Rocky’ her long haired Alsatian in the apartment we take him with us. 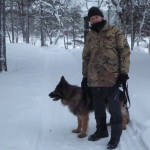 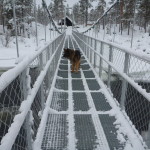 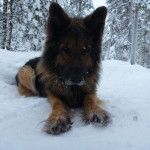 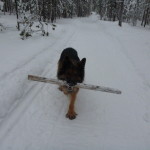 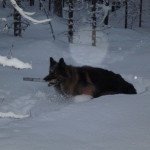 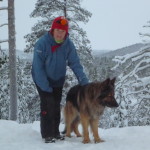 The walk is beautiful but we soon realise we have way too many clothes on.  Usually we’re cold but today it’s so mild and we take off our down jackets and we’re much more comfy.  Rocky loves chasing snowballs and later we discover he’s fond of stick chasing.  He’s a bit scatty for such a big dog but well behaved off the leash.  After the walk an afternoon nap then over to see Ola and use the WiFi and catch up with friends.  It’s Nicole’s birthday (Daz’s daughter) tomorrow.  She’ll be 18.  Happy Birthday!!!! Hopefully she’ll have the car on the road – Daz’s present to her with contribution to her insurance.  Happy driving Nicole!

A really quiet day today.  Only one couple for dog sledding.  Erkki and Daz build the new Lavuu whilst Rob and I sort out the dog team.  In the afternoon we help Horse Satu with horse clients.  There are 4 who want to ride so 4 horses need to be prepared and then each horse needs to be led.  We also receive horse handling training from Horse Satu.  Apparently dealing with horses is about establishing respect so they want to do what their asked.  So we have to lead our horse.  Come to a definitive stop by stomping.  Marching on the spot and doing the chicken dance with our arms if we want the horse to back up.  It works in training but it makes no difference when we’re taking the clients out. My horse, Stella, just wants to be as close to Snellie’s arse as possible no matter how much I was pulling on her harness!  I ask Daz how he got his to walk so slow, but he just had the only male horse and was typically slow!!

Lucy has been escaping from her kennel.  3 times she’s got out.  She’s had enough of her puppies and when we bring water for them she runs off with the water dish, her pups are obviously driving her to despair! Mind you, if I was having to lick clean Shithead everyday I’d be wanting out! Today she is moved back to her old home in the main dog area.  From now on the puppies are on their own. 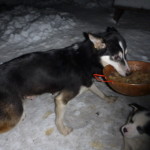 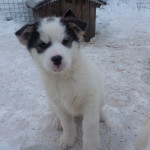 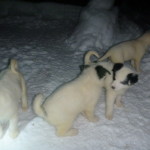 News today – Rob isn’t happy here since the fire and has decided he will leave (3rd Feb) coincidentally the same day as Ola.  And there is to be a change of schedule.  Erkki (and Lukas) don’t like the volunteers in the main house so instead of staying the night, all volunteers will be on day working and will return to the apartment.  We think this will start around 3rd February when Rob leaves.   So we’ll see how that suits everyone!

We’ve had confirmation of a job in Norway for mid June and we’ve been offered work in Iceland, thanks to a recommendation from Heli.  We got really excited when they offered us 25000 Icelandic krona each per month……………………..but then discovered it’s only £125 but still that’s £125 more than we’re earning from our other jobs.

Today Erkki brings the new volunteer.  He’s Belgian, called Sebastian.  He’s only been learning English for 2 months and so he’s going to struggle to follow what we’re saying.  Lukas tries French to begin with but he soon reverts to English.  Seb’s only 20 and full of energy.  Erkki should have brought Maria today but she and Ola decided to hitch to Karigasniemi (and perhaps to Norway) yesterday.  It’s 100 km north of Inari.  They left at 10am yesterday and they were supposed to catch a bus back but missed it!!  So no Maria today and Horse Satu has had to cover for Ola in Villa Lanca.  More of this later.

Today we have to prepare 4 teams and all goes well with our new volunteer. Although the language is a barrier, he is a quick learner.  We have also been told by Erkki that we will no longer stay overnight at the farm from today.  Seb will do the next 3 nights and then after that no volunteers will stay on the farm.  So this will mean warm showers everyday and a real toilet!!!  But possibly early mornings too !!

More news. Maria and Ola made it back to Inari today but for whatever reason they have left. So we’re down to 4 volunteers and one of those, Rob, is leaving on the 3rd February.

Back at the apartment we contact Ola and arrange to meet them in PaPaNa’s to hear their news.  They got a lift within 10 minutes but as the lady was going to Kautokeino in Norway they decided to go there instead of Karasjok where they had originally intended.  They had a pleasant afternoon but started hitching back at 5pm and soon realised they were unlikely to make it back.  They text boss Satu how wasn’t receptive to the news they were stranded in Norway.  They got one lift with a truck driver but decided to stay there because the lady who had given them a lift earlier had promised to get them back to Inari by 10am Wednesday.  By the time they got back to Inari they’d had more texts from boss Satu of such a nature that they decided their work for Erkki and Satu had reached its end.  So that’s 4 volunteers that have left much earlier than planned and one employee who’s been sacked.  Erkki thinks it’s the quality of the volunteer but the common denominator is the bosses and the work.

Erkki picks us up at 9am – that’s me, Daz and Rob but there’s only 2 clients today so that’s just one dog team to prepare.   There’s been snow during the night and much of it has blown onto the farm track. So job number one – clear the farm track of snow, Seb and Daz go at it with the hand ploughs and me n Rob follow with shovels trying to keep up with them!  Then Rob, Seb and I prepare the dogs whilst Lukas and Daz each take a skidoo to clear the route for the sleds, this was Daz’s first excursion on the skidoo and all he had to do was follow Lukas, but he said he had fun especially when. Cornering as they are not as responsive as you would think.  Whilst he is away I go to get Bang, one of the pups.  He’s going to run today. But disaster strikes.  Only yesterday Daz was laughing because I’ve yet to lose a dog.  Today I lost 3.  3 of the pups escaped when I was trying to get Bang out.  It was mayhem.  I shouted for Rob but he didn’t hear me or realise why all the other dogs were barking and making a huge din.  Usually a give away of an escaped dog.  The 3 pups were running round the public area and into the horse paddock.  I managed to capture 1 but it took ages to get the other 2.  What a nightmare.  I could have kept it quiet but was certain Lukas would spot all the dog prints everywhere including the horse paddock.   In the end we had to chain Bang’s kennel mates to get him out.  And he had a great run. However we do get told off later as Daz forgot to take the collars off the pups and they chew one of them in two!!

There’s now yet another change afoot.  Erkki has brought some sort of wood cabin/bungalow on skis which should be delivered at the weekend.  It’s going to be the volunteers hut – where they go for brews and lunch etc.  But there’s been talk of bunk beds so perhaps we’ll go back to night farming.  The cabin even has a sauna – apparently. So Erkki marked the spot where he wants it and the digger came to clear the ground. As it was such a quiet day Erkki was about to leave and had said to Daz that he would pick us up at 630pm, Daz exclaimed at the lateness, it was only 230 now and all the jobs including poop pickup had been done, Erkki relented and decided to take us home, so an early finish, but we are waiting for the new schedule to see if we will be getting a day off soon… otherwise we will have to have words!

We have 2, yes read it and weep, 2 days off!!!  So off we go, hire langlauf skis and off we ski to the Wilderness church with Rocky the dog.  Its been over 20 years since Daz did langlauf and he was soon on his arse, but my laughter was cut short as I hit the ground too!!  But we soon found our ski legs and setting a good pace.  We get to the church and the cabins and coincidentally Petri is there waiting for some horse sled clients so he gets a fire going which is a welcome respite from the cold and snow.  We visit the church and then get back, we think we might run into the horse sleds on the way back so to be careful we put Rocky on his leash…. I am soon on my arse again as he drags me down a slope, “Daz? Will you take him?”

Fortunately it’s not long before we pass the sleds and we can let him off again. 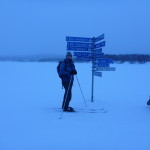 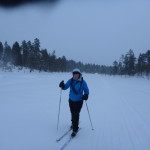 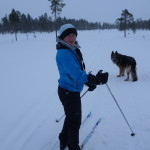 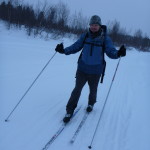 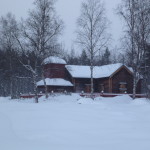 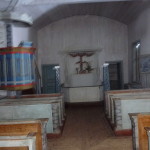 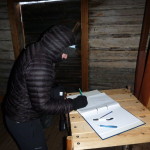 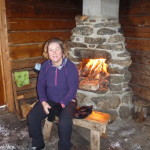 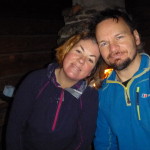 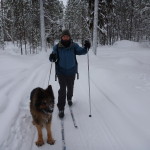 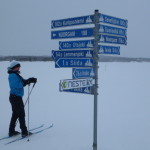 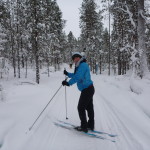 After our amazing skiing adventure and a nap we complete the day with a lovely celebratory (it’s our last paid day in the Army! Tomorrow we will be civvies!) meal at the Kultahovi hotel; 5 courses of wonderful local produce including reindeer.  It certainly rivalled some of our better experiences in the UK!